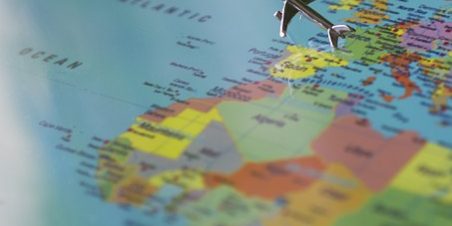 Those of you with innovative souls who want to build their business across the bridge and give Africa a chance,

should first ask themselves this question:

Africa is a continent with huge potential for African entrepreneurs and an encouraging environment for foreign investors. For the past ten years, Africa has witnessed a tremendous economic growth. In part these trends was attributed to the continent’s young population that contributes to a growing labour force, which is a highly valuable asset in an ageing world. With a population of 1.216 billion, out of this, 226 million are aged 15- 24 years, accounting for 19 percent of global youth population. According to the United Nations, by 2030, Africa’s youth population is projected to increase to 42 percent.

This population growth runs in parallel with the household consumption growth and as a result Africa’s consumers are estimated to spend $2 trillion by 2025. Demands for services such as technology, infrastructure, education and job creation are at heavily required.  According to Bloomberg, during the past 10 years, the gross domestic product of the 11 largest sub-Saharan countries increased to 51 percent, more than twice the world’s 23 percent. In addition, this robust expansion has been accompanied by stabilizing inflation on the African continent, with the consumer price index for all of Africa declining to 7.8 percent from more than 13 percent in 2008.

Furthermore, improved political and security situations in most African countries is regarded as a contributing factor to the economic growth of the continent. The number of conflicts has declined since 2000, and political stability and democratic governance have improved in many countries. The improvement of the macroeconomic and business climate has also played a major role primarily in the reduction of external debt: In the 1990s, many African countries were crippled by debt; from 2002, however, Africa’s external debt fell after a series of initiatives to cut debt were put in place. The 1996 Heavily Indebted Poor Countries (HIPC) Initiative and the 2005 Multilateral Debt Relief Initiative (MDRI) cut debt in 30 African countries by about US$100 billion (The European Parliament).

The combination of rapid and sustained economic growth and the diminishing inflation has lured many global investors to invest in Africa. These trends are irresistible for many investors and their success has made Africa one of the biggest emerging-markets in the world. In a recent study by the Business Insider UK, based on the forecasts from the World Bank’s Global Economic Prospects, compiled a list of 13 countries with the highest projected compounded annual growth rate (CAGR) from 2014 through 2017 and found that six out of thirteen of these countries were in Africa.

However, it is not all a plain sailing. Challenges still exist in the continent and enthusiastic investors must bear in mind before taking their chances in Africa. It is imperative that, when looking at business potential in Africa investors chose carefully which country to go to.  in particular, the growth and stability of any individual African country must be assessed. McKinsey Global Institute (MGI) in their analysis of African countries, measured three aspects of economic stability: Macroeconomic stability, Economic diversification, and political and Social stability.

Three distinct groups of countries emerged from this analysis.

This study indicated that approximately one-fifth of Africa’s GDP comes from a set of countries that are called the growth stars, with high rates of growth and a high score on stability. These countries include: Côte d’Ivoire, Ethiopia, Kenya, Morocco and Rwanda, these countries are not dependent on resources for growth, are actively reforming their economies, and are increasing competitiveness.

The second set of countries, referred to as the unstable growers account for 43% of Africa’s GDP. This group have experienced high growth rates over the past five years but lower scores on stability. This group includes countries such as: Angola, the Democratic Republic of Congo, Nigeria and Zambia, all of which have clear potential but need to diversify their economies away from resources, to improve their security, or stabilize their macro-economies.

Finally, there are the slow growers that accounted for 38% of GDP in 2015; this group includes South Africa, Madagascar and the three major North African countries involved in the Arab Spring – Egypt, Libya and Tunisia.

So, with these potentials and pitfalls in mind, as with any business environment globally, investors must apply an element of caution when deciding where to invest. The process should involve conducting research and receiving expert guidance from someone who is there and has good local knowledge. AIDER will match you with the expert who specialises in the African region of your interest. They will guide you with your business plan to create your vision and tap into the African market. AIDER’s guidance will be an invaluable asset to any business to minimise risks and maximum your business output.